52-5 bingo is a relatively new version of the classic bingo game. Unlike 90-ball and 52-ball bingo, the game is played with playing cards instead of numbered bingo balls.

Just like in classic bingo, players purchase bingo tickets to a game. Each ticket is called a 'hand' and includes 5 playing cards out of the standard 52-card deck (jokers excluded). A caller calls out playing cards randomly and if they appear on the player's ticket, they are covered by a chip. The first player to cover all 5 playing cards on a ticket wins the game. 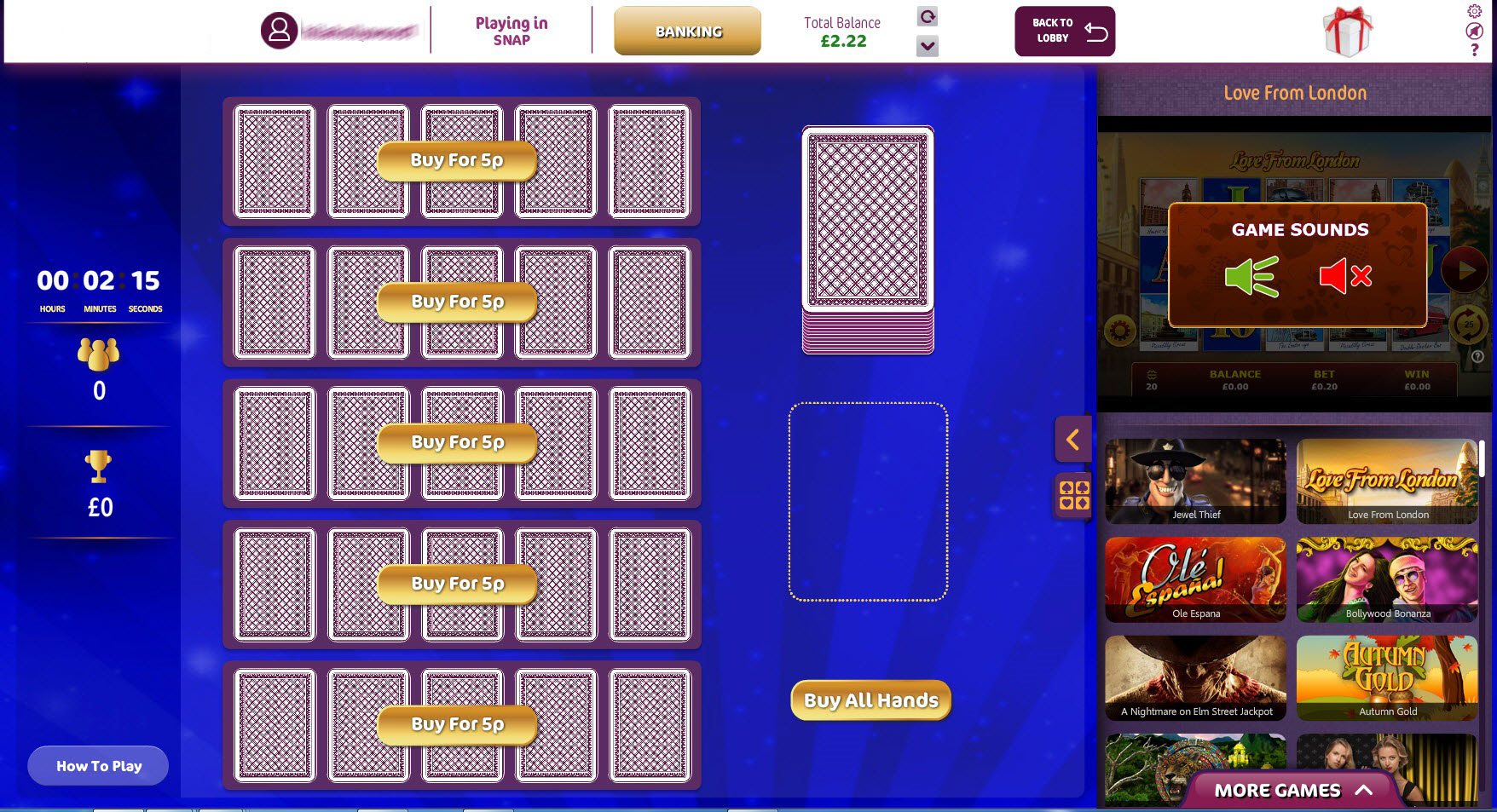 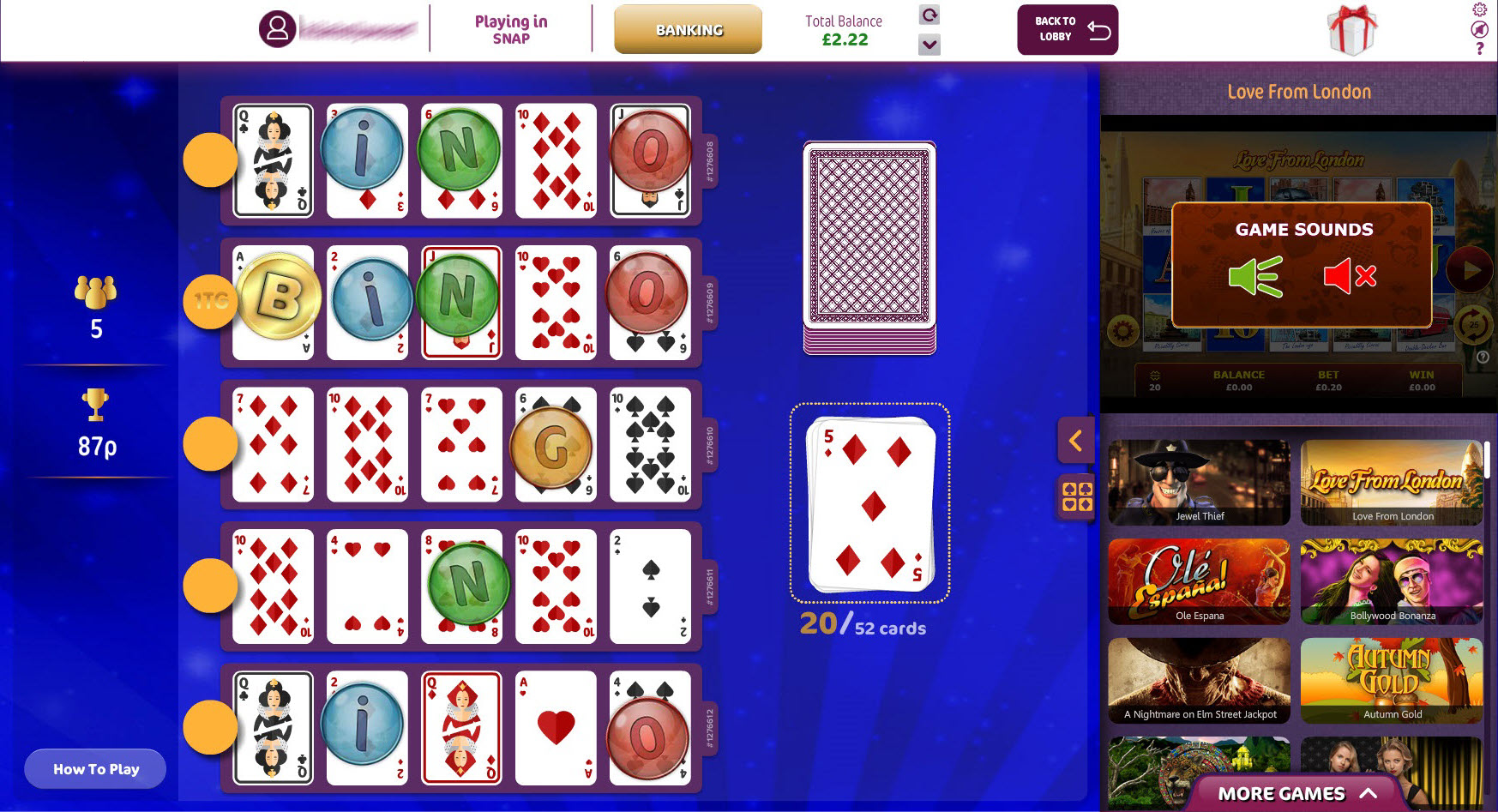 Tickets sold at 52-5 bingo games each contain 5 playing cards out of the standard 52-card deck. The cards are revealed immediately upon ticket purchase. 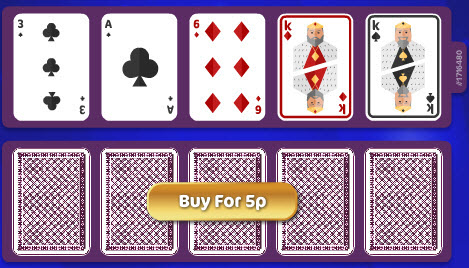 52-5 games only have one winning pattern, the Full House, which occurs when all 5 cards on at least one purchased ticket are covered.

In order to play, it is required that you purchase at least 1 ticket in a game of 52-5 bingo.

In a single game, you can purchase up to 5 tickets maximum.

Before purchasing tickets, you need to fund your bingo account with the right amount of money.

You'll be able to see the price per ticket on the each ticket's purchase button. All ticket prices in a game are the same.

Each ticket is purchased separately by clicking the "Buy for Xp" button and confirming the purchase using the "Confirm" button.

When purchasing a ticket, its unique identifier will appear next to it as a reference for communicating with support agents.

This number will also be available in the game history section of the player's "My Account" menu. 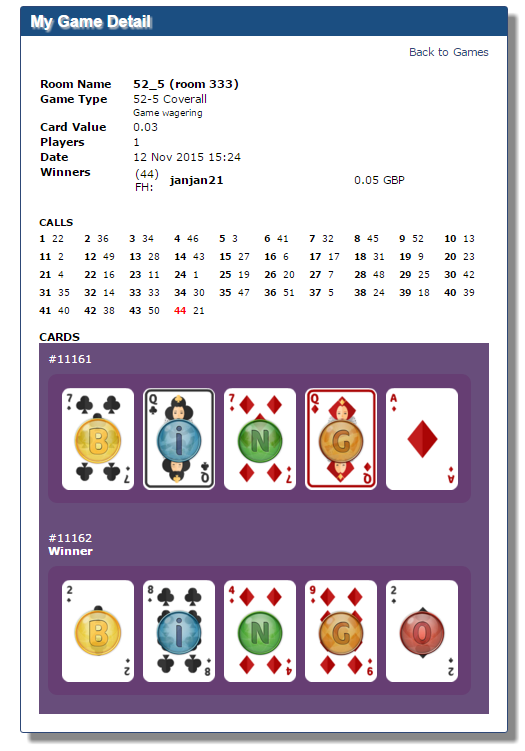 The perquisite for entering a bingo game is the purchase of at least 1 ticket.

It is only possible to purchase tickets after you have funded your bingo account with sufficient funds. You'll always be able to view your account balance at the top of the bingo screen. To deposit into your account anytime, click the "Cashier".

After you purchase tickets for a bingo game, the next step is to wait for the game to begin. You can keep track of the time left until the game starts by checking the buy time countdown, which appears in the top left corner of the bingo screen.

When there are only 30 seconds left to game start, the timer will turn red and will alert you by sound that you should hurry up and purchase your tickets.

New bingo games begin every few minutes so the wait is never long. Once the game begins, the caller will reveal the next card from the shuffled deck.

If you missed a few calls, you can always check which cards were called in the 'Calling Board' tab on the right side of the screen. 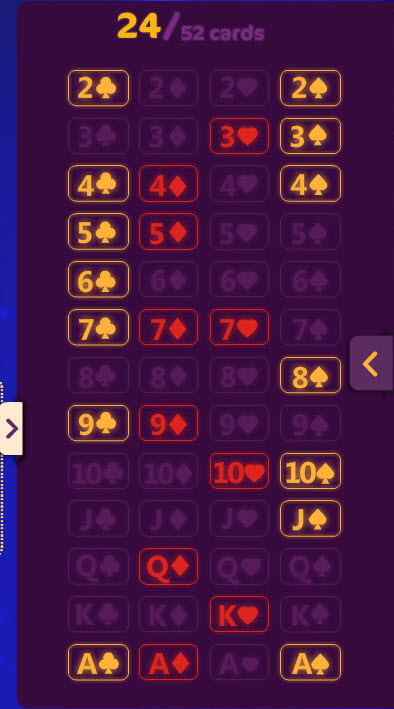 Additional game information is available on the game info panel on the left, including the number of players who have entered the game (purchased at least one ticket), the available jackpots and how to win them and a "how to play" button with a tutorial on how to operate the game. 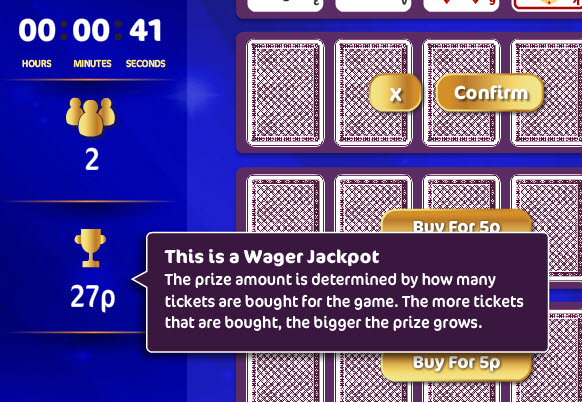 The speed in which your ticket is automatically covered doesn't affect the outcome, so even if your connection speed is slower than that of another player, and you have the winning ticket, the prize is yours no matter what!

If a player gets a Full House on their bingo ticket, the game will end and a winning message will appear including the names of the winners.

Since it's possible for multiple winners to win a single game, the jackpot will be distributed evenly between the winners or by the proportion of winning tickets, depending on the specific game played. 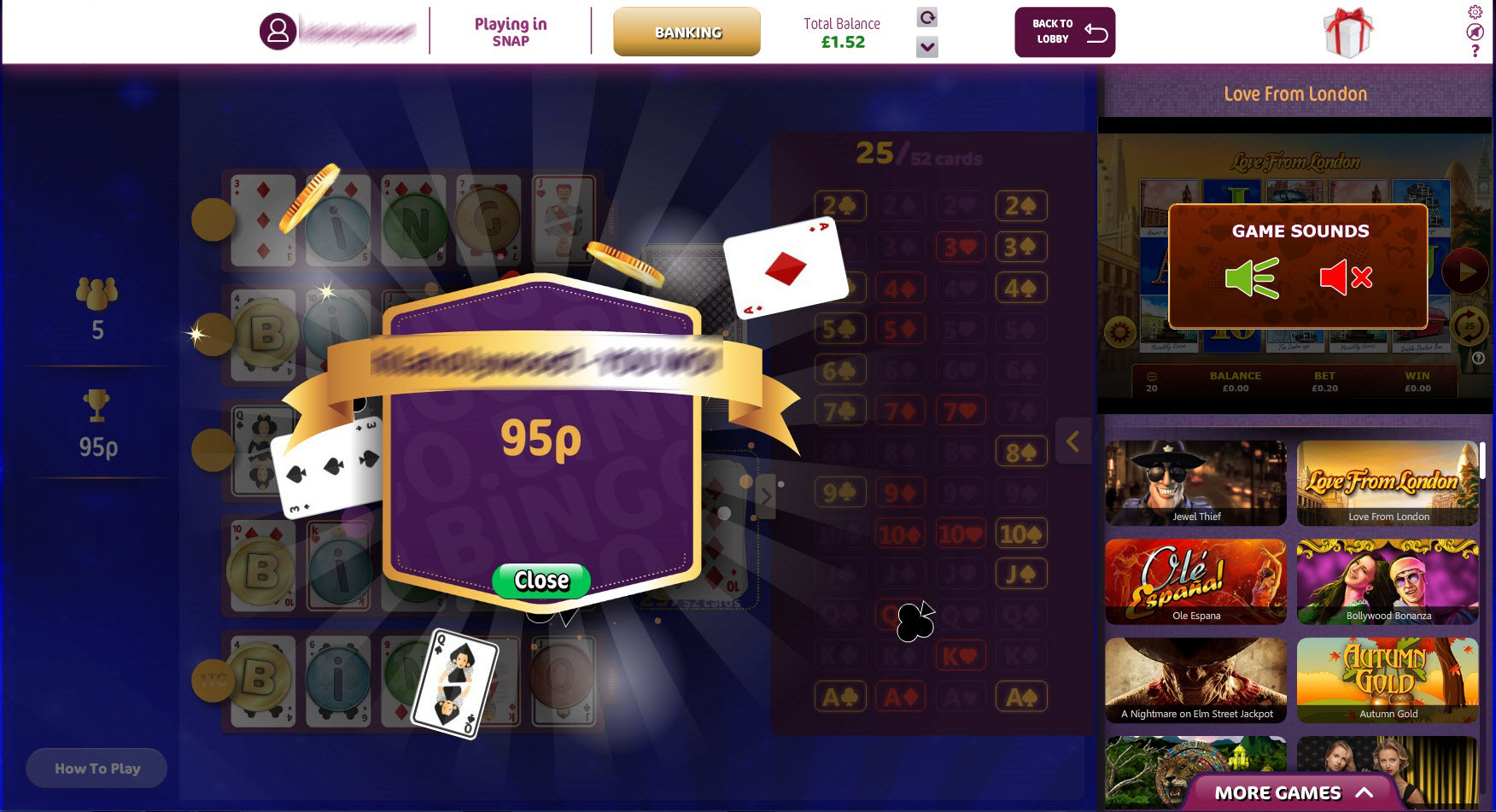 If you weren't in the room in time to see the winning message, don't worry, you'll still be awarded your wins and you can see details of previous games in the "game history" section of the "my account" menu.

The game Return to Player (RTP) in Bingo 52-5 is affected by ticket price and number of tickets purchased in each game.

Our bingo progressive jackpots are awarded when a player achieves "bingo" in less than a certain amount of calls.

To know the criteria for a game you're considering buying into, simply hover over the progressive jackpot icon in the info panel on the left and a tool tip will appear with the specific number of calls you need to bingo in. 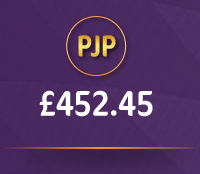 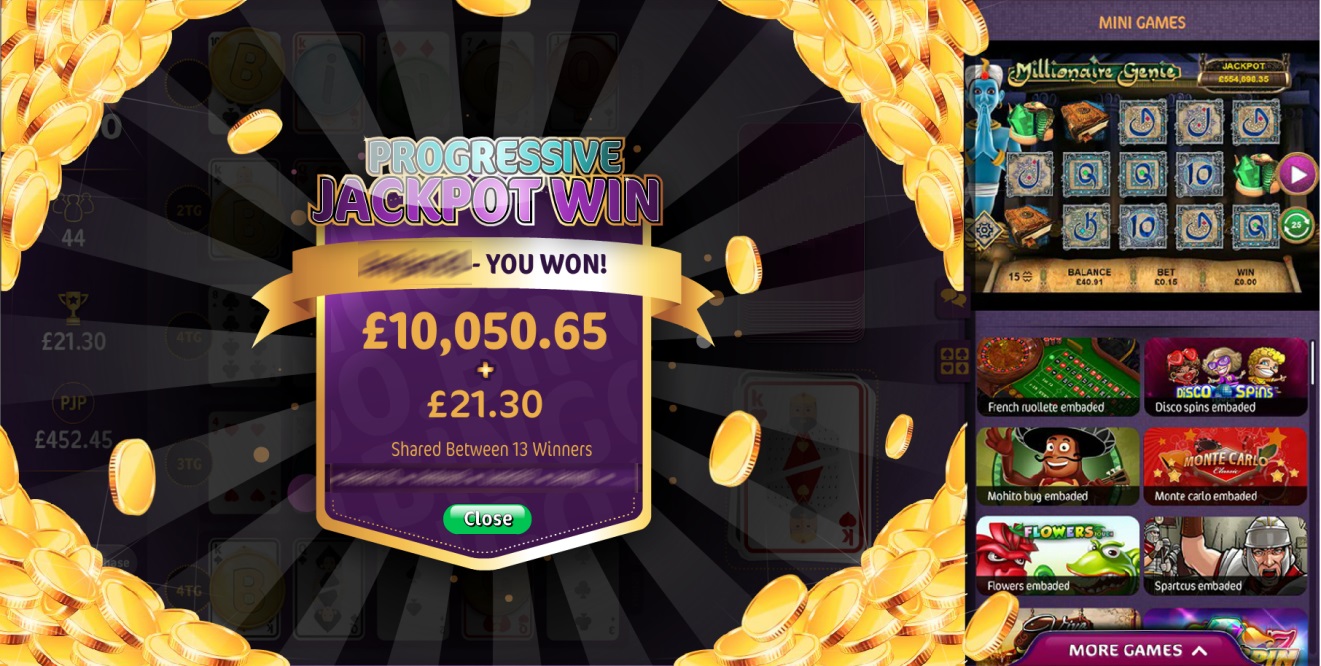 We understand that sometimes internet connections can be lost and that you might get disconnected whilst playing a game. If this happens, the system will continue to auto cover for you and you'll be awarded any prizes you may have won during your short time away.

Games may be canceled for various reasons, when not enough players have bought into the game, or due to a technical issue. If you purchase ticket for a game which was canceled, you'll automatically be refunded the tickets' cost.